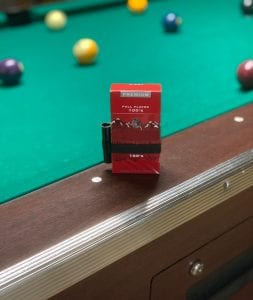 Quickout first came to life in early March, 2015 in Charlotte, North Carolina while attending a billiards tournament. It was approximately 1.30 a.m. and  I had been playing for several hours in the tournament. It was nearly over with only a few players remaining. I had stepped outside to smoke a cigarette. Upon making it out front on the side walk and lighting up a cigarette and taking a couple drags from it. My name came out of the speaker to start a new match. There I was with a newly lit cigarette with no control of extinguishing it and saving it for later. My only option was to discard the unused portion of the cigarette into the butt can, “What a waste!” , I thought as I entered back inside.

Returning home later that morning that waste of a cigarette was on my mind with the cost of cigarettes on the rise. The next few days I was determined to invent a device that would give me control over cigarettes instead of cigarettes controlling me. The next day or two went by and it came to me that I need a tube to slide the lit cigarette in.

So,  I started experimenting with different types of tubing and sizing. Within a couple days, I had a tube sealed up on one end with the correct and perfect sizing for the cigarette to slide in and out easily. It worked great that  I had solved my problem.

The next few weeks I was enjoying the little device that I had came up with that gave me complete control when smoking. I could smoke a couple drags, slide the unused portion into the tube and it was out cold with in 3 or 4 seconds. I was noticing a pack was lasting days instead of a day.

I was being asked by others what is that you have on your pack or what are you sliding that cigarette in.  I reply “This is my Quickout.” “Neat!  where can I get one?” they replied. Everyone that smoked was asking for one. So one night a friend said you need a patent so I contacted an attorney and  I was awarded a patent number and within a month, Quickout was born. Quickout has changed a many a smokers lives in 38 states and three countries and counting.